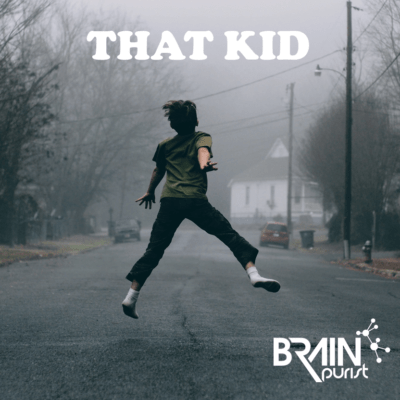 Stream/Download THAT KID on your preferred music service: https://brainpurist.ffm.to/thatkid

This is what he says about the new tune: “It’s about my good friend musician who was abandoned as a child and had to find his way around foster homes.

His story inspired me as he became an audacious man that crushed all his demons by himself. That’s why this song is kind of an uplifting, big danceable beautiful wall of sound that breaks all obstacles.

I googled around and found out that are roughly 400.000 children in the USA foster care system. This might seem like a tiny fraction of the total population, but these are almost half a million stories. Half a million souls that need love, patience, inclusion, and a chance to become independent and in this crazy, crazy world.”

That Kid is carefully and meticulously composed and produced to reflect all the emotions, downs, and ups that an abandoned kid goes through. Multilayered horns and strings during the chorus compete with the dynamic male vocal, trying to find their shiny place, just like in the real world. Electric guitar, played by Brain Purist’s friend Boris Kapetan gives a touch of organic sound and counteracts the played (and then chopped) up piano line.

If you ever wondered what does the name Brain Purist actually mean.. look no further. It is actually an anagram /a remix of letters/ of his old hip-hop producer name “Urban Spirit”.

“I grew up listening to classic house and hip-hop and followed them and watched them evolve. You know I started with… Armand Van Helden, Masters at Work, Barbara Tucker, Mood II Swing, and on the other and Dr. Dre, Snoop, Common, Neptunes, Timbaland. Their work deeply inspired me, and it is rooted in my sound. Whenever I put out a single, I try to bring some of the old vibe and soul back. I’m not a typical EDM hoover-stadium-hands in the air artist. I care about melodies, layers, chord changes and inversions, choruses, bridges… I do anything within my possibilities for you to free your mind and do your dance.”

By the way, Brain Purist’s single, “Wish You Were Here” has been selected as a Finalist in the 2016 Unsigned Only Music Competition in the EDM (Electronic Dance Music) category. This is a remarkable achievement, as only 3% of all entries made it to the finalist status.

Watch The Playlist of all Brain Purist Singles: